Dreaming of becoming an actor? Forget about it and become a botanist instead. That’s the message heard around the world by Wells Fargo’s new campaign promoting a career in science over one in the arts. I didn’t believe it at first, but when I saw the ad with my own two eyes, it left me speechless. What shocked me the most was the not so subliminal messaging’s complete and total disregard for those who have chosen a life of service in the arts. This kind of agenda is not only offensive, its downright dangerous. But it’s okay. Why? Because the world needs artists, and I’m about to tell you why. 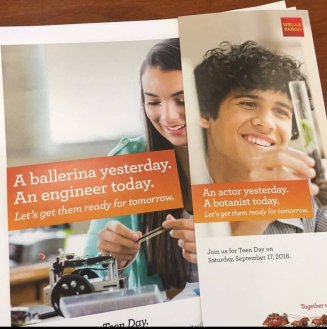 No one will ever condemn you for becoming a doctor, a dentist, or even a mathematician. There’s a well defined place for these trades on the upper echelon of society, and to be frank, there should be. Doctors save lives. Dentists save smiles. Mathematicians apparently do a lot of things that are hard to boil down in one sentence. But what about the artist? Where does he belong in the world?

Creative author and blogger, Jeff Goins, explains in a blog post from earlier this year what he thinks the purpose of art is: “Art allows us to see the invisible, to call forth light in a world shrouded in darkness. It speaks to that most real part of ourselves we’ve forgotten. It transcends circumstance and grants perspective.” To someone who isn’t an artist, this explanation can easily seem a little dramatic. But to those who have been initiated with countless rehearsals and performances, it couldn’t be clearer. The problem here is that it’s so hard to quantify what an artist does. But we are not just artists. We are people– men and women who have been placed on earth to serve a purpose.

To find out what that purpose is, lets look to one of the world’s greatest minds– Plato. On man’s role in the world he says, “A man’s duty is to find out where the truth is, or if he cannot, at least to take the best possible human doctrine and the hardest to disprove, and to ride on this like a raft overs the waters of life.” If we take this quote to be true, wouldn’t art be considered “the best possible human doctrine” to find truth? Just as Jeff said, art allows us to see the invisible; that invisible thing is truth. And who more fit to reveal the secrets of the world than the artist?

I want to be sure not to devalue the importance of science and math in our society. They’re real. But I also want to make sure that artists get the praise that we deserve. What we do is real too. It changes lives and is one of the best ways to find the truth–and that may be the very reason we were put on earth in the first place.
Do you think being an artist is a viable career path? To view the results of our Twitter poll click here. And for more articles like this, subscribe!